Irezumi is a Caltrop Core TTRPG of loyalty and ambition, inspired by crime drama in particular Yakuza crime drama. Tattoos are how you customize and progress your character through 4 phases of their career as a member for a Yakuza organization. A career path that should inevitably end in tragedy but a tragic tale worth talking about.

The Art, Layout and a huge portion of the writing where all created by me as a labour of love. It' might be a bit big as a Caltrop game (48 pages from cover to cover) but the PDF contains all the information you need to play the game, artwork, a character sheet, and an introductory scenario. "A Rainy Night in Kabukciho." Which should introduce the mechanics and the feel of a Irezumi game.

In order to download this game you must purchase it at or above the minimum price of $5 USD. You will get access to the following files:

Support this game at or above a special price point to receive something exclusive.

I've decided that I'd make 10 more community copies available for people interested in reviewing the game or trying it out. I've very much appreciate that if you take a community copy that you leave a review for the game to help spread the word!

Irezumi is a yakuza noir TTRPG. It runs on the Caltrop Core engine, it favors a romanticized portrayal of yakuza, and it's easy to learn and a solid choice for emotionally heavy oneshots and short campaigns.

The PDF is 48 pages with gorgeous art, and the tattoos within the art are really lovely. The visual composition is clever, and the tattoos wrap around bodyparts in a way that implies a whole image without needing to show it.

Also, as a bonus, the game comes with a very clean, very well-designed character sheet.

In Japanese, irezumi (lit. 'putting in ink') can refer to any kind of tattoo, but in English it is often used to specifically talk about yakuza tattoos. And that's its meaning in Irezumi. In Irezumi, you play a mobster through the four phases of their life. Each phase corresponds with a season: spring, summer, fall, winter. As you play, you add to your tattoos, and what you add informs how you play.

There is some creative prep before play, where the group builds the outfit that their characters are going to be part of, but it isn't onerous and the book provides a lot of helpful context.

Individual character creation is also fairly quick. You prioritize mind/body/social, pick your tattoos and their locations, generate three health tracks (mind/body/social,) and start with a strong sense of social obligation (giri) and a low sense of human desire (ninjou.)

A typical roll in Irezumi is a pool of d4s, counting the highest, with 1 as a botch, 4 as a crit, and 2s and 3s as complications. Notably, every time you botch or crit, your ninjou changes, so simply attempting regular rolls can strengthen your character's sense of self-identity and their need to push against the strictures of their organization. You can also spend giri to improve the results of your rolls---and this has the interesting effect of making it so that the freer you are, the more powerful you are, right up until you antagonize everyone around you. If your ninjou ever exceeds your giri by too much, you lose a piece of your pinky plus a stat point and set your ninjou back to zero.

Combat in Irezumi is slightly more complicated than standard rolls, and you match numbers with your opponent to remove their results in a neat little minigame, however this isn't really a game that you have to break out the mat and minis for. There's no initiative, no movement, nothing extraneous to fuss with. If you're fighting a ton of foes, you take a penalty to your roll, but that's about as granular as it gets.

Between seasons there's downtime, and the game really does encourage quiet, reflective moments to counterbalance the violence and materialism of play. You can give gifts, get tattoos, plant story seeds, spend time in jail, or outfit yourself with a variety of new items. And on the subject of tattoos, there are *a lot* to select from---and they're divided into major and minor elements, meaning you pick your foreground and background for each piece, which is a really cool touch.

As far as GM and player resources, there's guidance throughout the book, that aforementioned character sheet, some terminology sections, and a starter scenario specifically geared to act as a tutorial to the game.

Overall, Irezumi is a gorgeously illustrated crime drama ttrpg with a focus on long phases of play, personal turmoil, and organizational politics. Some elements are left a little vague (the seasons aren't super different mechanically,) and the game may feel kind of outsider-looking-in with regards to its topic, but it's also nuanced and clearly researched and has a topic and a style that most ttrpgs don't. If you like crime, noir, long stories, the godfather, ryu ga gotoku, really good art, and yakuza fiction, take a look at Irezumi.

Thank you kind for the in depth review of the game. I honestly really appreciate it. I'm also glad you really love the illustrations. My main job is as an illustrator and I took I think longer illustrating the art that I did writing the game lol!

Those illustrations are stellar, and they add a ton of life to the game!

Thank's Sol! I've got a few different game ideas for down the line. 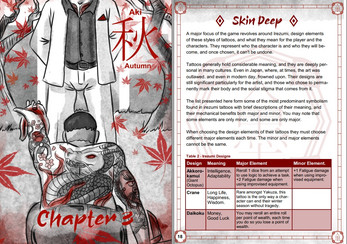 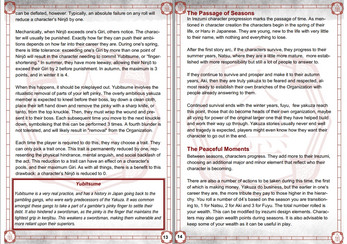 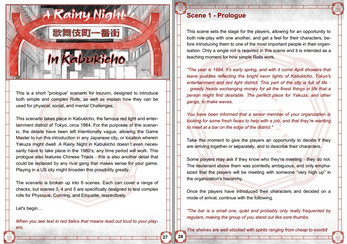